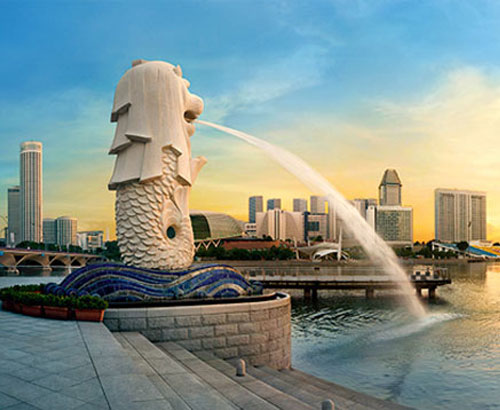 Singapore, an island city-state off southern Malaysia, is a global financial center with a tropical climate and multicultural population. In circa-1820 Chinatown stands the red-and- gold Buddha’s Tooth Relic Temple, Little India offers colorful souvenirs and Arab Street is lined with fabric shops. Singapore is also known for eclectic street fare, served in hawker centers such as Tiong Bahru and Maxwell Road.

Singapore, an island city-state off southern Malaysia, is a global financial center with a tropical climate and multicultural population. In circa-1820 Chinatown stands the red-and- gold Buddha’s Tooth Relic Temple, Little India offers colorful souvenirs and Arab Street is lined with fabric shops. Singapore is also known for eclectic street fare, served in hawker centers such as Tiong Bahru and Maxwell Road.

There are so many attraction in Singapore like. Singapore River: Strolling along the banks of the Singapore River, or taking a river cruise, one sees some of the famous landmarks of Singapore. Clarke Quay and Boat Quay are filled with shops and restaurants, and houses of government, temples and museums can all be viewed from the comforts of a luxury boat.

Location: An island and islets in the heart of Southeast Asia, between Malaysia and Indonesia

Language: English is the language of business and instruction. Malay is the official language. Most Singaporeans are bilingual in English and a second language, commonly Mandarin, Tamil or Malay.

Arrive Singapore. You will be met and transferred to your hotel. Check in to the hotel. Rest of the day at leisure to explore this beautiful city on your own. In the evening proceed to the Night Safari tour; the only safari in the world that opens at night; a not to be missed tour where you can see how it is like to be in a nature reservevia joy tram ride at night with all kinds of the animals from all over the world in their natural habitat of which some are rare. Enjoy night viewing of around 2500 animals of 135 exotic species. You can also enjoy cultural performances which are regularly organized at the safari.

After breakfast, proceed for a city tour of Singapore; an orientation tour that begins with a drive around the Civic District, the Cricket Club and the historic Parliament House, Supreme Court and City Hall. Stop at the Merlion Park for a great view of The Marina Bay and a picture-taking opportunity with The Merlion. The tour continues with a visit to the Thian Hock Keng Temple, one of the oldest Buddhist - Taoist temples on the island, before driving past Chinatown to a local handicraft centre. The final stop is at Little India.

In the afternoon enjoy a trip to Sentosa. Experience a cable car ride to Sentosa Island, visit the 'Images of Singapore' and then take monorail ride to the Under Water World. Experience, Dolphin Lagoon, Luge and Skyride and end the day with the magical Musical Fountain –Wings of the Time with laser & lights display.

After buffet breakfast, Day is at leisure. The day calls for your own plans. You can go for self exploration of the city or you can join us for an exciting day at Universal Studios (at an extra cost).

South East Asia’s first Hollywood movie theme park with seven zones including Jurassic Park, Shrek, Sci-Fi City, New York, Hollywood, Madagascar and Ancient Egypt, Universal Studios is a fantastic world of movie magic. With numerous rides and attractions based on Hollywood blockbusters, it is a great day out for all ages. Later return to hotel and retire to sleep.

Buffet breakfast at the hotel. Check out of the hotel and transfer to the airport for your flight back to India / onward journey. You can also extend your holiday by taking the various add on options available.