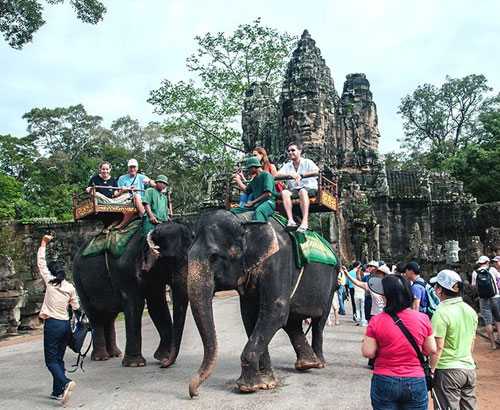 Cambodia is a Southeast Asian nation whose landscape spans low-lying plains, the Mekong Delta, mountains and Gulf of Thailand coastline. Its busy capital, Phnom Penh, is home to the art deco Central Market, glittering Royal Palace and the National Museum's historical and archaeological exhibits. In the country's northwest lie ruins of Angkor Wat, a massive stone temple complex built during the Khmer Empire.

Cambodia is a Southeast Asian nation whose landscape spans low-lying plains, the Mekong Delta, mountains and Gulf of Thailand coastline. Its busy capital, Phnom Penh, is home to the art deco Central Market, glittering Royal Palace and the National Museum's historical and archaeological exhibits. In the country's northwest lie ruins of Angkor Wat, a massive stone temple complex built during the Khmer Empire.

Location: Southeast Asia; bordered by Thailand, Laos, Vietnam, and the Gulf of Thailand.

Climate: Tropical, with two seasons, Rainy (May through October) and Dry (October through May). Temperature rarely falls below 80 degrees Farenheit.

Upon arrival in Phnom Penh, airport reception and transfer to your hotel for check-in Afternoon start a half day city tour including the Victory Monument, and the National Museum (called as Musee des Beaux-Arts). Next, you’ll visit a French archaeologist and painter, Georges Groslier, designed it in Khmer style in 1917. The museum contains a collection of Khmer art - notably sculptures – from throughout the ages. You’ll also discover the Royal Palace, built by King Norodom in 1866 on the site of the old town, and the Silver Pagoda, located within the grounds of the Royal Palace, the Silver Pagoda is so named because of its floor, which is made up of 5000 silver tiles. The treasures found inside includes a solid gold Buddha encrusted and weighing 90 kilograms and a small 17th century emerald and baccarat crystal Buddha. End of day stop at the Central market and in right time to views over the tree-lined avenues of the city during sunset. Overnight at hotel in Phnom Penh

In the morning we visit to Tuol Sleng Genocide Museum (S 21), followed the Killing Fields of Choeung Ek it is approximately 15Km from the city. You’ll witness Cambodia horrible recent past. Afternoon, continue to visit Phnom Penh Municipality Hall, National Library, National Bank. End tour, stroll around Russian market (Psah Tuol Thom Pong), a lively outdoor market where you will find antiquities, silver and gold jewelry, gems, silk, kramas, stone and wood carvings, as well as T-Shirts, CDs and other souvenirs. Back to the hotel. Overnight at hotel in Phnom Penh

Morning, we drive to Phnom Penh by shuttle bus. En route you will cross an ancient bridge called “Spean Kompong Kdei” it was built in the 13th century and it is 87 meters long. The balustrades are carved to look like the bodies of giant snakes. Upon arrive Siem Reap, check in hotel Overnight at hotel in Siem Reap

Today, visit to the antique capital of Angkor Thom, built in the 12th century: the South Gate with its huge statues depicting the churning of the ocean of milk, the Bayon Temple, unique for its 54 towers decorated with over 200 smiling faces of Avolokitesvara, the Phimeanakas, the Royal Enclosure, the Elephants Terrace and the Terrace of the Leper King. After a short your rest, you will visit the most famous of all the temples on the plain of Angkor: Angkor Wat. The temple complex covers 81 hectares and is comparable in size to the Imperial Palace in Beijing. Its distinctive five towers are emblazoned on the Cambodian flag. This masterpiece is considered by art historians to be the prime example of classical Khmer art and architecture. Angkor Wat’s five towers symbolize Meru’s five peaks - the enclosed wall represents the mountains at the edge of the world and the surrounding moat, the ocean beyond. End of day take a relaxing stopover at Prasat Chrung visiting Tadev Hole and temple with the best Sunset. Return to your hotel and end of the tour. Overnight at hotel in Siem Reap

Free at leisure until transfer to airport for departure flight.