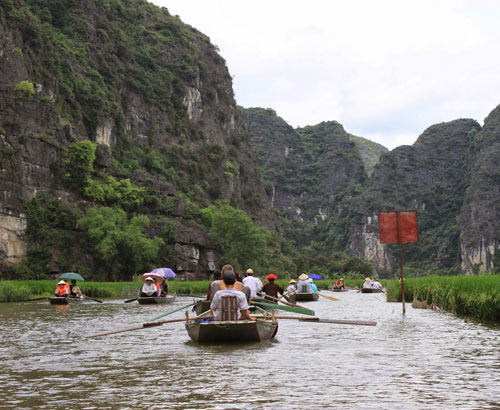 Our services begin here. You are greeted at the airport by our Travel facilitator, and then ushered to a chauffeur driven vehicle. You are then driven to your hotel where you are assisted with your check in. The next day’s plans are briefly reviewed and the Travel facilitator hands over travel documents such as your hotel vouchers to you.

Start your exploration of Vietnam with a city tour of Hanoi. The tour includes Hanoi’s cultural and historical highlights, comprising Lake of Restored Sword, Ngoc Son Temple, the Temple of Literature, the Ethnology Museum (closed on Monday) and a downtown pedicab ride (1 hour) around the old quarters of Hanoi, a collection of narrow streets, each named after the product sold.
There is a break for lunch.
Afternoon – proceed on a drive to the famous Bat Trang pottery village with a history of 500 years, situated on the left bank of the Red River about 9 miles from downtown Hanoi. Observe the artisans forming, painting and glazing their products, which are then baked for several days in huge kilns.
Evening - Enjoy a water puppet show, a theatrical genre reflecting the agricultural civilization of thousands of years ago.


Proceed for a full day excursion to Halong, 105 miles from Hanoi. Board a private boat for a cruise in Halong Bay (4 hours), a world heritage site recognized by UNESCO in 1994. Marvel at the 1000’s of odd-shaped islands, visit magical grottoes, and relax in the best scenic beauty of Vietnam.
Lunch of fresh seafood is included this afternoon.
Return to Hanoi with stops at ceramic and hand embroidery workshops en route.

Check out from your hotel by noon. Your vehicle and driver transfer you to the airport for departure flight. Our services end at Hanoi airport.

PACKAGE DOES NOT INCLUDE:
- international flights
- international airport taxes,
- other meals, beverages,
- visa stamp fee (to be paid at Vietnam embassies or on arrival at airport),
- personal  expenses,
- travel insurance,
- porter, and other services  unmentioned above.
- GST