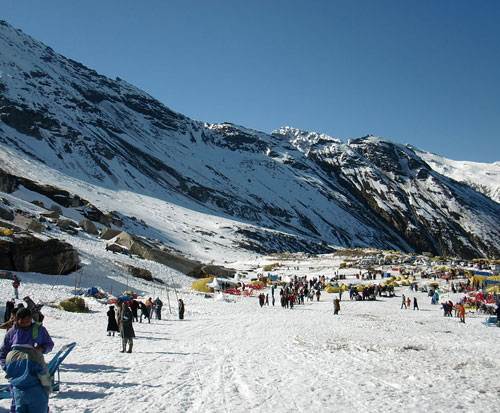 On arrival Jammu meet for assistance and transfer to Patnitop. Overnight stay at Hotel

After breakfast Proceed for local sightseeing which includes Nag Temple and excursion to Nathatop and Sanasar. After Sightseeing, transfer to Pahalgam en-route through the green pine forest and along the Lidder River. On arrival at Pahalgam, check in to Hotel for Overnight stay at Pahalgam.

After breakfast check out from the hotel. Enjoy Local sightseeing at Pahalgam. In the Late Afternoon Drive to Srinagar for overnight at Hotel/Houseboat.

After breakfast at Houseboat, depart by surface for Gulmarg. Gulmarg - one of the most beautiful summer resorts in the valley. It is also popular for its golf course during summer season, take Gondola chair car (pay directly ticket charges) and as a ski resort during the winter season. In the late afternoon return back to Srinagar, time for shopping and overnight at hotel.

After breakfast, proceed for full day excursion to Sonamarg (meadow of gold) has as its backdrop, snowy mountains against a cerulean sky. Ponies can be hired for the trip up to Thajwas glaciers major attractions. Overnight stay at Houseboat

After breakfast, enjoy ride on a Shikara - a Kashmiri gondola - to the watery vegetable markets and see the mountains mirrored in the lakes. You will get a view of some very interesting places around the Lake. Visit Mughal Gardens and city tour in the evening return to Houseboat/Hotel for overnight.