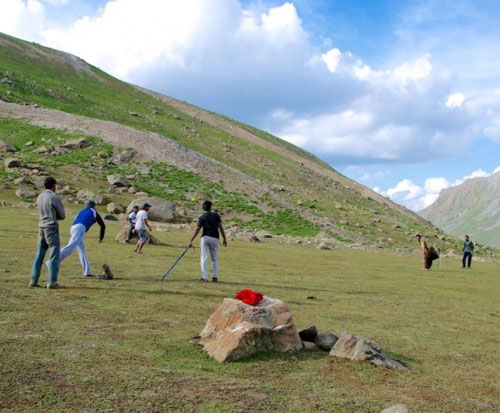 Assist at the airport and transfers to your hotel or houseboat for check in. Srinagar is at once a collection of images: It tells the story of love of the Mughal Emperors for this paradise like vale with deep green rice fields, rivers, gardens in bloom and lakes rimmed by houseboats, where lush wild gardens of lotus and water-lily grow amidst bustling lanes. Afternoon visit important sights of Srinagar City, Shankarachariya Temple & Mughal Gardens .Overnight stay at the houseboat

After having breakfast in the hotel, in the morning, you will be driven for full day excursion trip to Sonamarg. It is a place of enthralling beauty, lies in Sindh Valley, streamed with flowers, surrounded by mountains and perched at an altitude of 2690 m above sea level. Visited less frequently by tourists, it has as its backdrop, snowy mountains against a clear sky. It is a quiet alpine retreat surrounded with sycamore, silver birch, fir and pine trees and the last halt on the Kashmir side for the drive from Srinagar to Leh. It is also the base for some interesting treks to the high altitude of Himalayan Lakes. In late, Afternoon drive back to Srinagar, overnight stay at the houseboat

After breakfast at the house boat, you will be driven from Srinagar to Pahalgam, en-route visit Saffron fields of Pampore, see the beautiful countryside, lots of rice fields and Awantipura ruins on the way, Later continue your drive to Pahalgam through the pine forest, the confluence of the streams flowing from the river Lidder & Sheshnag Lake which are famous for their scenic beauty. On arrival proceed for check-in. Overnight stay at the hotel

Around Pahalgam are many places of interest, and because the resort is set between fairly steep hills, it is worth hiring a pony rather than walking. The most beautiful of these is the huge, undulating meadow of Baisaran, surrounded by thickly wooded forests of pine. Overnight stay at the hotel

After early breakfast at the hotel, you will be driven from Pahalgam to Gulmarg on arrival proceed for check-in. Gulmarg was discovered as a tourist destination by the British in the 19th century. Prior to that, Mughal emperors vacationed in the Gulmarg valley which is about 03 Kms long and up-to 01 km wide. It is exquisitely situated in a pine surrounded basin of the Pir Panjal range at an altitude of 2,730 meters above sea level and one of the most famous tourist destinations of Kashmir. It also has one of the world’s highest green golf courses with 18 holes, as well as a clubhouse, which is a historical building in its own right. Overnight stay at the hotel

After breakfast, transfer to Srinagar at leisure for personal activities.