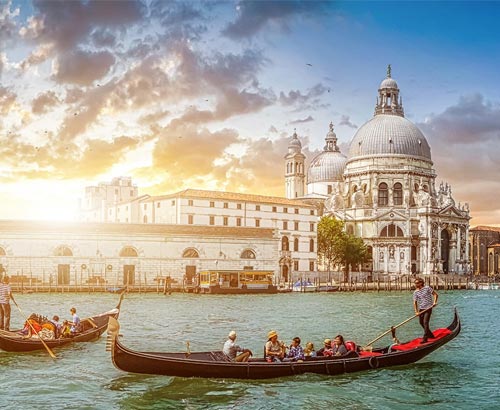 culture and cuisine. Its capital, Rome, is home to the Vatican as well as landmark art and ancient ruins.
Other major cities include Florence, with Renaissance masterpieces such as Michelangelo’s &quot;David&quot; and
Brunelleschi&#39;s Duomo; Venice, the city of canals; and Milan, Italy’s fashion capital.

culture and cuisine. Its capital, Rome, is home to the Vatican as well as landmark art and ancient ruins.
Other major cities include Florence, with Renaissance masterpieces such as Michelangelo’s &quot;David&quot; and
Brunelleschi&#39;s Duomo; Venice, the city of canals; and Milan, Italy’s fashion capital.
Italy is one of Europe&#39;s most complex and alluring destinations. A modern, industrialized nation, with an
artistic and architectural legacy that few other countries can rival, it&#39;s also a Mediterranean country
with a southern European sensibility, where traditional attitudes still prevail.
Facts &amp; Figures:
Population: 61.6 million people live in Italy (2016)
Capital: Roma (Rome), which is often called &#39;Eternal City&#39;, with 2.6 mio inhabitants and Italy’s biggest
city.
Name: Repubblica Italiana (Italian Republic) or simply: Italia, Nickname: &#39;Bel Paese&#39; which means
beautiful country
Government: Democracy, Republic
Language: Italian as well as German, French and Ladin in some regions in Northern Italy.
Literacy: More than 98% can read and write.
Religion: mainly Christians (Roman Catholics 90%)
Currency: 1 Euro=100 cents, before 2001 Italian Lira
Calling code: +39
Flag: The colors represent these virtues: hope (green), faith (white), and charity (red).
Climate: With its hot, dry summers and cool, wet winters, Italy experiences a mediterranean climate.
Winters in Italy are cool and humid in the north and the mountainous zone. ... In The summer these
Winds can bring very hot, unpleasant weather, sometimes even up to the northern districts of Italy.
Best time of Visit: The best time to visit Italy is in the spring (April to June) or fall (September and
October) when there are fewer tourists, lower prices, and moderate temperatures. The summer
months can be hot, crowded, and expensive. The winter months are often grey, wet, and cold in the
north but temperate south of Rome.

Arrive into Venezia, La Serenissima, Queen of the Adriatic, city of canals and palaces. For a thousand
years the city was one of the most enduring mercantile sea powers on the face of the earth. On arrival
at the San Marco Airport a private transfer will take you to your hotel. Check-in at hotel. In the evening
take a Gondola ride. Enjoy floating along the canals of Venice. Be captivated by the glamour and
elegance of the city and its magnificent palaces and churches facing the Grand Canal. One of the
gondoliers will play music and sing songs throughout the ride. Evening is free to explore the city on your
own. Overnight at the Hotel.
DAY 02: VENICE ISLAND TOUR
Today after breakfast, proceed to Alilaguna&#39;s Pier at St. Marks waterfront, embark on a motorboat and
visit the Island Murano, where one can watch the antique art of making glass. Then one proceeds to the
characteristic Island of Burano, with its strong colours and light contrast, fisher island and renowned for
lace making. Last Island Torcello with its old Cathedral and its atmosphere of remote Venetian past.
Return to St Mark&#39;s Square. Day is free and at leisure. Overnight at the Hotel.
DAY 03: ROME
Breakfast in the Hotel. Arrive into the Eternal City Rome. Check into the Hotel. Later proceed for a tour
in this Imperial City. Starting from Piazza Venezia with its impressive monument dedicated to King Victor
Emanuel II and the Unknown Soldier, you then continue on foot to the famous Piazza del Campidoglio
designed by Michelangelo from where you will have a fantastic view of the Roman Forum. Our coach
will continue by the Circus Maximus and the Pyramid of Caius Cestius before arriving at the Basilica of
St. Paul outside the walls* (visit inside). The tour will be completed with a stop outside the imposing
Colosseum. Return to the vicinity of your hotel. Time at leisure. Overnight at the Hotel.
DAY 04: ROME
Breakfast in the Hotel. A Visit to the Vatican Museum. The tour begins by through Piazza della
Repubblica with the Fountain of the Nayads and following the ancient Aurelian walls which once
surrounded the ancient city. En route you will see the famous Villa Borghese park and the northern gate
of the ancient city leading into Piazza del Popolo where you will see an Egyptian obelisk dating back to
the time of Ramses II. Finally, on arrival at the Vatican Walls, your guide will then lead you into the
Vatican Museums*. Return to the vicinity of your hotel.
DAY 05: DEPARTURE
Breakfast in the Hotel. In the morning, according to your flight, departure to Rome airport.