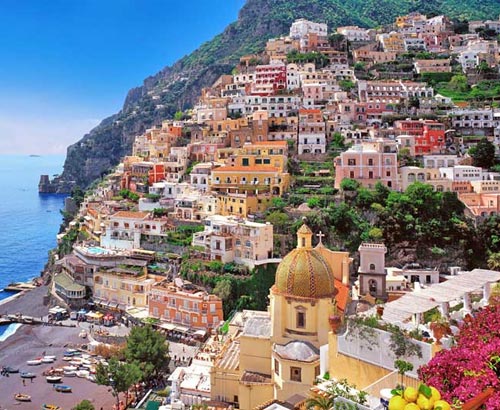 Italy, a European country with a long Mediterranean coastline, has left a powerful mark on Western culture and cuisine. Its capital, Rome, is home to the Vatican as well as landmark art and ancient ruins.

Other major cities include Florence, with Renaissance masterpieces such as Michelangelo’s &quot;David&quot; and
Brunelleschi&#39;s Duomo; Venice, the city of canals; and Milan, Italy’s fashion capital.

culture and cuisine. Its capital, Rome, is home to the Vatican as well as landmark art and ancient ruins.
Other major cities include Florence, with Renaissance masterpieces such as Michelangelo’s &quot;David&quot; and
Brunelleschi&#39;s Duomo; Venice, the city of canals; and Milan, Italy’s fashion capital.
Italy is one of Europe&#39;s most complex and alluring destinations. A modern, industrialized nation, with an
artistic and architectural legacy that few other countries can rival, it&#39;s also a Mediterranean country
with a southern European sensibility, where traditional attitudes still prevail.
Facts &amp; Figures:
Population: 61.6 million people live in Italy (2016)
Capital: Roma (Rome), which is often called &#39;Eternal City&#39;, with 2.6 mio inhabitants and Italy’s biggest
city.
Name: Repubblica Italiana (Italian Republic) or simply: Italia, Nickname: &#39;Bel Paese&#39; which means
beautiful country
Government: Democracy, Republic
Language: Italian as well as German, French and Ladin in some regions in Northern Italy.
Literacy: More than 98% can read and write.
Religion: mainly Christians (Roman Catholics 90%)
Currency: 1 Euro=100 cents, before 2001 Italian Lira
Calling code: +39
Flag: The colors represent these virtues: hope (green), faith (white), and charity (red).
Climate: With its hot, dry summers and cool, wet winters, Italy experiences a mediterranean climate.
Winters in Italy are cool and humid in the north and the mountainous zone. ... In The summer these
Winds can bring very hot, unpleasant weather, sometimes even up to the northern districts of Italy.
Best time of Visit: The best time to visit Italy is in the spring (April to June) or fall (September and
October) when there are fewer tourists, lower prices, and moderate temperatures. The summer
months can be hot, crowded, and expensive. The winter months are often grey, wet, and cold in the
north but temperate south of Rome.

Arrive into the Eternal City Rome. Private car transfer will take you to your hotel in Rome. Evening tour,
to discover the Eternal City, the Fountain of the Nayads, Roman Forum, Coliseum, Arch of Constantine,
Circus Maximus, Castel Sant&#39;Angelo, St. Peter&#39;s, Porta Flaminia, Via Veneto, Piazza Navona, Trevi
Fountain (meeting point near your hotel and drop off near your hotel). Back to hotel. Overnight in Rome
DAY 2 – ROME
After breakfast in Hotel, the Vatican tour begins: Piazza Della Repubblica, Aurelian walls, Villa Borghese
Park, Piazza del Popolo. On arrival at the Vatican Walls, your guide will lead you into the Vatican
Museums and the Sistine Chapel (ticket included - Pick up from your hotel and drop off in center of
Rome). Go inside St. Peter’s Basilica. Rest of the day free. Overnight in Rome
DAY 3 – NAPLES
Breakfast. Travel by fast train to Naples. Arrive in the Capital of the Campania Region of Italy- Naples. It
sits on the coast on the northern edge of the Bay of Naples, one of the most beautiful bays in Italy. The
day is free to relax. Overnight in Naples
DAY 4 – NAPLES - POMPEI - AMALFI COAST – NAPLES
After breakfast in the hotel, visit of the ruins of Pompeii, buried by the eruption of Vesuvius in 79 A.D.
and brought back to light nearly intact. The tour will show you the lifestyle of the ancient inhabitants of
the town. Stop in a local shop to see the production process of Cameos and Corals. After lunch, you will
enjoy a panoramic tour of the Amalfi Coast, with the beautiful towns of Sorrento, Positano, and Amalfi.
Return to Naples. Overnight at Naples
DAY 5 – FLORENCE
After breakfast, proceed to Florence. Travel by Fast Train. Check-in at the hotel, in the afternoon Tour to
Pisa. Travel to the picturesque Tuscan countryside of Pisa. Upon arrival, enjoy a guided walking tour of
Piazza dei Miracoli, Leaning Tower, the Baptistery and the interior of the Cathedral. Back to Florence
(Reach meeting point on your own near the hotel). Overnight in Florence
DAY 6 – VENICE
Breakfast in the Hotel and departure to Venezia by Fast Train. Check-in at the hotel. Later proceed to
Alilaguna&#39;s Pier at St. Mark’s waterfront. Embark on a motorboat to visit the Island Murano to witness
the art of making glass. Followed by Island of Burano and Torcello. Return to St Mark&#39;s Square and enjoy
a beautiful Gondola ride on the small canals of Venice (Reach the meeting point for the tour in St Mark
Square on your own). Overnight in Venice Mestre.
DAY 7 – DEPARTURE
Breakfast in the Hotel. In the morning, depart to the Venice Marco Polo Airport with a Private transfer.