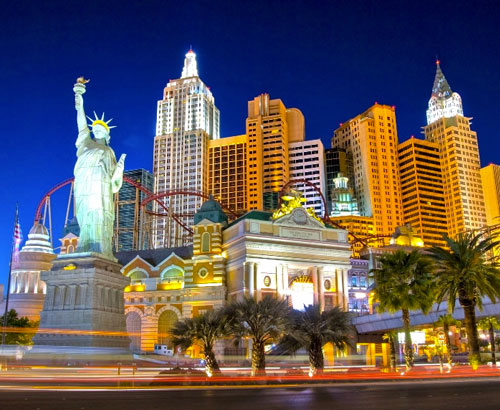 The U.S. is a country of 50 states covering a vast swath of North America, with Alaska in the extreme Northwest and Hawaii extending the nation’s presence into the Pacific Ocean. Major cities include New York, a global finance and culture center, and Washington, DC, the capital, both on the Atlantic Coast; Los Angeles, famed for filmmaking, on the Pacific Coast; and the Midwestern metropolis Chicago.

The U.S. is a country of 50 states covering a vast swath of North America, with Alaska in the extreme Northwest and Hawaii extending the nation’s presence into the Pacific Ocean. Major cities include New York, a global finance and culture center, and Washington, DC, the capital, both on the Atlantic Coast; Los Angeles, famed for filmmaking, on the Pacific Coast; and the Midwestern metropolis Chicago.

Facts about the U.S.A.

Motto: In God We Trust

Welcome to the "Big Apple," the "City That Never Sleeps"— New York is a city of superlatives: America's biggest; its most exciting; its business and cultural capitals; the nation's trendsetter. For more than a century, it has been one of the world's major centers of commerce and finance. Upon arrival at the airport, you will be transferred to the hotel.

After breakfast we proceed for a City Tour of New York. The city tour will include USA’s famous landmark “Statue of Liberty”. We will take a ferry ride to Liberty Island for a spectacular view of the New York City Skyline. Next we experience the view of a lifetime from the 86th floor of the Empire State Building, Later in the day we will see Rockefeller Center, Wall Street, Ground Zero and Central Park, Times Square, United Nations and Trump. (Meals: B)

Today we proceed by surface transfer to Washington DC, capital of the United States of America and a Guide to the Historic Neighborhoods and Monuments. Other than the federal government, tourism is DC's biggest industry. The city attracts almost twenty million visitors each year. After checking in at the hotel, you will explore the capital city of US. See the White House, Lincoln Memorial, Supreme Court, the Capitol Building, the Smithsonian Air and Space museum, Union Station, World War II Memorial Building, Pentagon building and Washington monument. (Meals: B)

Travel to Buffalo by surface or flight transfer to view the world famous falls, which forms one of the natural wonders of the World. (Meals: B)

After breakfast we will board the famous boat “Maid of the mist” which takes us close to the thundering falls and around the American and Horseshoe Falls (seasonal). Return to the hotel to freshen up after your damp ride. You can also visit the falls on own at night to see them lit up beautifully. (Meals: B)

Today we depart to Orlando by flight. Orlando is the sixth largest city of Florida and is also known to be its largest inland city. The presence of Disney World theme park has made this city a well-known vacation spot. This city is said to welcome more than 52 million tourists every year. Upon arrival transfer to your hotel. (Meals: B)

Today you will visit the Magic Kingdom, which covers 107 acres, opened on October 1, 1971. It's been dubbed "The Most Magical Place on Earth!" and is home to seven themed lands, and dozens of attractions that appeal to all ages. It is the place where storybook fantasy is everyday reality, and Disney classics are brought to life from the moment you step onto Main Street USA, you are transported to a place where the cares of the outside world seem to magically melt away. (Meals: B)

Begin your day at the Epcot center where you can touch the future and travel the world with an amazing array of attractions and live performances. This is an area of 260 acres devoted to past achievements and the future of technology. World showcase offers a kind of permanent World Fair, with pavilions devoted to eleven countries. (Meals: B)

Today you will visit the world's largest Marine Park Sea World - Here you shall discover many attractions. We dare you to take a one-of- a kind water coaster thrill ride through the mysterious lost city of Atlantis. Soar through danger on a jet copter ride to the Wild Arctic. At Sea World, touch, feed or get face to face with awesome and amazing wild animals, and get in on all the action that draws you back again and again! (Meals: B)

Depart in the morning for your flight to Las Vegas. On arrival, transfer to your hotel. In the evening, we proceed for the city tour, experiencing the spectacular Colorful Dancing Fountain water fountains of the Bellagio, the Pirate Ships at Treasure Island, Downtown Vegas, and of course Fremont street, where over 12 million lights create a free show with pumping music. (Meals: B)

Spend the day at leisure OR take the Grand Canyon Tour Bus OR Air (at Optional Cost added per person). Don’t Forget the New Wonder of the West the SKYWALK, In the evening, take the Las Vegas Night Flight (at Optional Cost added per person), a Helicopter Ride over dazzling night time Vegas, take in a fabulous Show or visit any of the free shows such as the Sirens of Treasure Island and much more. (Meals: B)

Today transfer by surface to Los Angeles today. Enjoy a city tour of Los Angeles we will drive you through the Entertainment capital of the world” Hollywood Walk of Fame, Beverly Hills, Grumman Chinese Theater, Sunset Strip, Rodeo Drive for the world’ most expensive shopping and Chinatown. (Meals: B)

Join us today for a tour of Universal Studios which has always been known for its innovative rides and attractions, and is designed to let visitors experience the movies like never before. A trip to Universal is like a trip into the heart of Hollywood. With films and TV shows always in production, one never knows who they might see wandering the sidewalks of the park. (Meals: B)

Today enjoy flight to San Francisco, which is one of the few North American cities to achieve the legendary status of such places as Paris or London. The city's well-known hills offer stunning views of the Pacific Ocean and San Francisco Bay, and feature a wide array of shops, restaurants, and cosmopolitan nightlife. In addition to its diversity and charm, San Francisco is a gateway to Silicon Valley, America's premier high-technology center. Upon Arrival, check in to the hotel. (Meals: B)

After breakfast, depart for the airport to board your flight for next destination. (Meals: B)